Tim Arnold grew up in Harvard, MA, and began the violin at age six with his grandfather's violin and his sister as his teacher. It was a musical family, with his mother as the leader on piano, brothers on French horn and trumpet, and sister also on violin. It was a wonderful 'quartet'. Selected at a young age for the Longy School Young Artist Program with Roman Totenberg, the Greater Boston Youth Symphony Orchestra, and the New England Youth Ensemble, Tim studied in his formative years with Virginia Gene Rittenhouse of Thayer Conservatory, and Leo Panasevich of the Boston Symphony. In 1975 while on an orchestra tour of Russian and Poland, Tim had the pleasure and honor to play a command solo performance for President Ford. In college Tim played with the Harvard Radcliffe Orchestra and the Bach Society, and more recently with the String Beings Quartet and as a sub for the Reno Philharmonic. Currently Tim plays with the critically-acclaimed Eggrock String Quartet, the Concord Orchestra, the Carlisle Chamber Orchestra, the Sounds of Stow, and is concert master of the Savoyard Light Opera Company, the Harvard Messiah Sing, and the Sudbury Savoyards. Tim was recently honored to perform the violin solo for the Mozart Sinfonia Concertante with the Sounds of Stow. Many summers Tim participates with the Kent, Bennington, Wyoda, and Orford chamber music festivals. In addition to playing music, Tim studies violin repair and restoration with Paul Wiessmeyer at the University of New Hampshire Violin Craftsmanship Institute, tends to his small farm in Harvard, plays squash, runs a small software company, spends time with his family, and can be found most days helping people at Bridges and Bows. 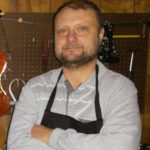 Dimitar Krastev has a master's degree in violin, chamber music, and teaching from the National Music Academy in Bulgaria. He was in the first violin section of the Bulgarian National Radio Orchestra, and participated in many different recording projects and tours in various European countries.

During all this time, he also worked as a luthier, repairing violins and other string instruments . Before moving to Massachusetts, he studied violin repair with Paul Wiessmeyer at the University of New Hampshire Violin Craftsmanship Institute.

Nowadays, among other things, Dimitar takes care of the string instruments at the Bridges & Bows shop, working with precision to ensure swift and high-quality repair services.